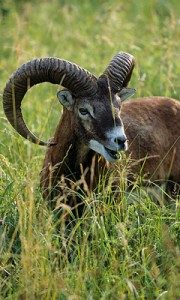 The mouflon settled from Corsica and Sardinia at the and of the last century. The best quality populations live in the Mátra, Budai, Börzsöny, Bükk, Pilis and Vértes moutains. The quality of the mouflon in the Zemplén Mountains is medium. Under the adverse conditions the mouflon preserved its wildness. This species lives in broad-lived forests and coniferous woods. The mouflon is hunted by stalking;on mountain terrain this requires outstanding sports performance. Sometimes you can approch this game on horse-drawn carriage. Shooting from elevated hides is doubtful, because the mouflon goes to the feeding ground and field fitfully.

Their trophy is the horn. The length of the horn could be around 100 cm.

The hunting season begins on 01 September, but the really adventure is stalking in the snow in November and December. The hunting of mouflon can be ideally combined with red deer culling and wold boar hunting during these months.

The mouflon (Ovis aries orientalis[1] group) is a subspecies group of the wild sheep Ovis aries. Populations of Ovis aries can be partitioned into the mouflons (orientalis group) and urials or arkars (vignei group).[2] The mouflon is thought to be one of the two ancestors for all modern domestic sheep breeds.

Mouflon have a red-brown short-haired coat with a dark back-stripe, light colored saddle patch . The males are horned; some females are horned while others lack horns. The horn is curved in almost one full revolution (up to 85 cm). Mouflon have a shoulder height of about 0.9 meters and a body weight of 50 kg (males) and 35 kg (females).

Today mouflon inhabit the Caucasus, northern Iraq, and northwestern Iran. Originally the range stretched further to Anatolia, the Crimean peninsula and the Balkans, where they had already disappeared 3,000 years ago. Mouflon were introduced to the islands of Corsica, Sardinia,Rhodes and Cyprus during the neolithic period, perhaps as feral domesticated animals, where they have naturalized in the mountainous interiors of these islands over the past few thousand years, giving rise to the subspecies known as European mouflon (O. aries musimon). In the island of Cyprus the moulfon or Agrino became a different and endemic species, which only found in Cyprus, the Cyprus moulfon (Ovis orientalis ophion). The Cyprus moulfon is about 3000 animals, only. They are now rare on the islands but classified as feral animals by theIUCN.[6] They were later successfully introduced into continental Europe, including Spain,France, Germany, central Italy, Switzerland, Austria, the Netherlands, the Czech Republic,Poland, Slovakia, Hungary, Bulgaria, Romania, the Canary Islands, and even some northern European countries such as Sweden and Finland. A small colony exists in the remoteKerguelen Islands in the southern Indian Ocean, and on the Veliki Brijun Island in the Brijuni Archipelago of the Istrian Peninsula in Croatia. In South America mouflon have been introduced into central Chile and Argentina[7]. Since the 1980s, mouflon have also been successfully introduced into game ranches in North America for the purpose of hunting; however in game ranches pure breeds are rare as mouflon interbreed with domestic sheep and bighorn sheep.[citation needed] Mouflon have also been introduced into Hawaii as game animals, where they cause serious damage to native plant species and are more difficult to control than other alien ungulates.

Their habitat is steep mountainous woods near the tree line. In Winter they migrate to lower altitudes.