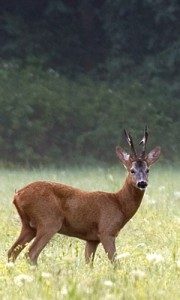 The ”crowned king” of the Hungarian forests is indigenous in Europe and in the Middle East. You can find red deer in the biggest number in Western Europe, but Eastern Europe (specially Hungary) gives habitat for the world’s finest quality red deer population. Red deer is the main big game in Hungary. The highest quality is found in provences Zala, Somogy and Baranya. Int he forests of the Western and Northern Transdanubia, Northern Mountains you can find smaller trophy deer. Geographic and climatic conditions combine to assure an ideal environment for red deer. The red deer lives in oaken, gallery matured forests where he can hide and find shade.

Their trophies are the antlers, which the male replaces every year.

For stag hunting the best time is the rutting seasons. The rut usually begins at the beginning of september. Stags can usually be shot from elevated hides or stalking. After the rutting season you can participate in culling hunts from November till the end of January. During this type of hunt hinds, calves and wild boars can aslo be taken. The percentage of the medals is 30-35 % of the culling.

The European roe deer (Capreolus capreolus), also known as the western roe deer, chevreuil or just roe deer, is a Eurasianspecies of deer. It is relatively small, reddish and grey-brown, and well-adapted to cold environments. Roe deer are widespread in Western Europe, from the Mediterranean to Scandinavia, and from the British Isles to the Caucasus. It is distinct from the somewhat larger Siberian roe deer.

English roe is from Old English raha, from Proto-Germanic *raikhon, cognate to Old Norse rá and German Reh. A fifth centuryrunic inscription on a roe deer ankle bone found in England (the “Caistor-by-Norwich astragalus“) transliterates as raïhan, thought to refer to the deer itself. Ultimately, the word may be drawn from the Proto-Indo-European root *rei-, meaning “streaked” or “spotted.” Another translation suggests that roe is an ancient word meaning the colour red.

The roe deer is distinct from the somewhat larger Siberian roe deer (Capreolus pygargus) that is found from the Ural Mountains to as far east as China and Siberia. The two species meet at the Caucasus Mountains, with the European species occupying the southern flank of the mountain ranges and adjacent Asia Minor and the Siberian species occupying the northern flank of the mountain ranges.

Within Europe, the European roe deer occurs in most areas, with the exception of northernmost Scandinavia (north of Narvik) and some of the islands, notably Iceland,Ireland, and the Mediterranean Sea islands; in the Mediterranean region it is largely confined to mountainous regions, and is absent or rare at low levels. Scottish roe deer were introduced to the Lissadell Estate in Co. Sligo in the Republic of Ireland around 1870 by Sir Henry Gore-Booth, Bt.[2] The Lissadell deer were noted for their occasional abnormal antlers and survived in that general area for about 50 years before they died out and there are not believed to be any roe deer currently extant in Ireland.

German colonial administrators introduced roe deer to the island of Pohnpei in Micronesia. They are hunted by locals in very steep and heavily vegetated terrain. The meat is openly sold in markets and restaurants in Kolonia, the capital city of Pohnpei and the Federated States of Micronesia.

The roe deer is a relatively small deer, with a body length of 95–135 cm (3.12–4.43 ft), a shoulder height of 65–75 cm (2.13–2.46 ft), and a weight of 15–30 kg (33–66 lb). It has rather short, erect antlers and a reddish body with a grey face. Its hide is golden red in summer, darkening to brown or even black in winter, with lighter undersides and a white rump patch; the tail is very short (2–3 cm or 0.8–1.2 in), and barely visible. Only the males have antlers. The first and second set of antlers are unbranched and short (5–12 cm or 2.0–4.7 in), while older bucks in good conditions develop antlers up to 20–25 cm (8–10 in) long with two or three, rarely even four, points. When the male’s antlers begin to regrow, they are covered in a thin layer of velvet-like fur which disappears later on after the hair’s blood supply is lost. Males may speed up the process by rubbing their antlers on trees, so that their antlers are hard and stiff for the duels during the mating season. Unlike most cervids, roe deer begin regrowing antlers almost immediately after they are shed.

The roe deer is primarily crepuscular, or primarily active during the twilight, very quick and graceful, lives in woods although it may venture into grasslands and sparse forests. It feeds mainly on grass, leaves, berries and young shoots. It particularly likes very young, tender grass with a high moisture content, i.e., grass that has received rain the day before. Roe deer will not generally venture into a field that has had or has livestock (sheep, cattle) in it because the livestock make the grass unclean. A pioneer species commonly associated with biotic communities at an early stage of succession, during the Neolithic period in Europe the roe deer was abundant, taking advantage of areas of forest or woodland cleared by Neolithic farmers.

The roe deer attains a maximum life span (in the wild) of ten years. When alarmed, it will bark a sound much like a dog and flash out its white rump patch. Rump patches differ between the sexes, with the white rump patches heart-shaped on females and kidney-shaped on males. Males may also bark, make a low grunting noise or make a high pitched wolf-like whine when attracting mates during the breeding season, often luring multiple does into their territory. The roe deer lives usually in small groups, each of which include a male, 2–3 females, and fawns.

The polygamous roe deer males clash over territory in early summer and mate in early fall. During courtship, when the males chase the females, they often flatten the underbrush leaving behind areas of the forest in the shape of a figure eight called ‘roe rings’. Males may also use their antlers to shovel around fallen foliage and dirt as a way of attracting a mate. Roebucks enter rutting inappetence during the July and August breeding season. Females are monoestrous and after delayed implantation usually give birth the following June, after a ten-month gestation period, typically to two spotted fawns of opposite sexes. The fawns remain hidden in long grass from predators until they are ready to join the rest of the herd; they are suckled by their mother several times a day for around three months. Roe deer adults will often abandon their young if they sense or smell that an animal or human has been near it. Young female roe deer can begin to reproduce when they are around 16 months old.